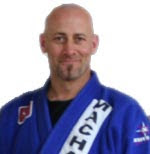 Geoff Grant is of the 'old school; - honorable, loyal, a man of his word - I like him immensely. It was an absolute pleasure for me to award him his BJJ Black Belt tonight at his school in Wellington. Thirty of his students were there to witness the occasion, which took place at the end of our two and a half hour seminar. Others in Geoff's class received blue and purple belts earlier in the evening - and so it was quite a seurpise when the award was made to Geoff at nights end. We even had cake!!
Geoff has been a driving force behind the growth and promotion of BJJ in New Zealand. He has a full and ever-expanding mat full of great students. Hi mat-culture is second to none. Geoff had a long involvement , at high level, in the martial arts before he turned his ful focus onto the art of BJJ. I consider him to be both an exemplary instructor, and a good friend. Tonight, I felt great pride in being there to witness and contribute to the next stage in his ongoing martial arts journey.
Earlier this trip, I also awarded purple belts to Steve Cockell and Karl Norton in Auckland, and the rank of Brown Belt to Shayne Cox in Napier. This makes way for new blues to move up into positions of responsibility as well as white belts - things are really accelerating in NZ with so many great mats acheiving a maturity that few could have predicted, even only a few years ago. Well done all - I am so very proud of how far you have come. My Kiwi friends are absolutely Rock-solid people. I love being here!!!
Best wishes and deepest respect,
JBW 2007
Email Post

Anonymous said…
I met Geoff once at his school while visiting Wellington. He is a great instructor and there was just a great vibe there.
12:04 pm