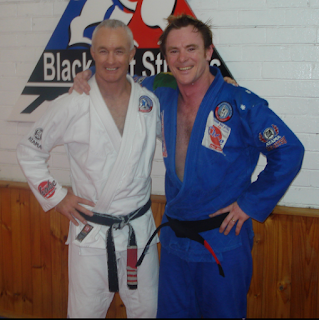 Last night, we held our 'end of year' BJJ Gradings at Black Belt Studios. Five new blue belts were presented (earned) - two purple belts - one brown (Stewie Moulden from Bendigo) and a Black Belt to BBS 's own Craig Robinson. I see Craig as a real martial arts success story. Through sheer perserverance and dedication, he totally re-invented himself. His 9 year journey has been a very transformative one and he stands out as a wonderful example of what can be achieved through steady and unflagging commitment to training.

Craig is one of the most 'club-minded' people in the school. His work with the intermediate students has been exemplary. It was a very proud moment for me when I presented him with the coveted rank. Well deserved Craig - a huge congratulations from myself and the rest of the students at Black Belt Studios.