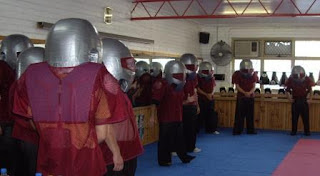 Well, after the past week, it's nice to have a breather for a day. What a week it was. The last two days of it was allocated to Adrenal Stress Conditioning; something that most martial artists don't train - or even consider. This is definitely a facet of training that everyone should experience. When people see pics or video footage of this training, they tend to focus on the unique Bulletman Suits - as we are all wearing in the pic here - and so are inclined to make snap judgements as to what the training is all about. But there is much more to it than wearing the suit and taking a pounding from the student. There are 'Boundary-setting' excerises, where the pressure is gradually ramped up and the students are taught to maintain their personal space and come back with appropriate and assertive response rather than a passive response (which gives the aggressor what he wants) or an overly aggressive response (which may well kick the confrontation into the realm of the physical). This is more difficult that it sounds. Only after students learn to successfully manage the effects of the adrenal rush they experience in this part of the training, are they exposed to the actual physical part where things are ramped up even further, and the Bulletman comes into action. Often it is the highly trained fighters that have the greatest difficulty in breaking contact with the aggressor, even after he has gone down - to the point where they are not aware of what's happenning behind and around them (so over-focussed as they are on the opponent) - although this is an asset in one-on-one competition - it is a huge and potentially deadly liability in a survival situation.
So those aspects and others were what was experienced by the students - on the instructor training side of things it was much more complex. There is the coaching role (guardian angel that talks the student through each altercation) - the Bulletman role - how to take the shots and be a good aggressor - and the woofer role - how to take on board various characters and understand how to elicit the right response from the student in the different scenarios.
Without going into detail - I have to say it was an enlightening, entertaining, fun and sweat-filled two days of training. It's something we all will do more of. Thanks to all who were a part of the experience - and a special thanks to Debra and Bill Kipp, who came all the way from Colorado t make it happen.
JBW
Email Post

Anonymous said…
Thank you for the insight into another level of training for self defense. I am very interested in learning where I would be able to participate in this training. I struggle with the adrenaline dump and managing my emotions. Do you have any information on how I could get involved in this training?
2:23 am

Anonymous said…
Thanks John for taking such good care of us in the Geelong and putting together a truly awesome group of Instructor Trainees. What a pleasure it is to have FAST Defense so well represented in Australia.
And it was great to reunite with you my friend and train in your great school a bit. Next time you will have to help me further refine my tapping out skills! Please extend a warm Hi to Melissa and the entire group. I look forward to future trainings together and am honored to have you on the Team as a Bulletman! Deb and I returned from the trip refreshed and ready to continue this crazy adrenal stress journey. Bill - PS-Regarding your statements about trained fighters under duress, your wife Melissa in my estimation hit hardest of all the participants!
3:00 am