The Philosophy of Fighting- Strategy - Warfare 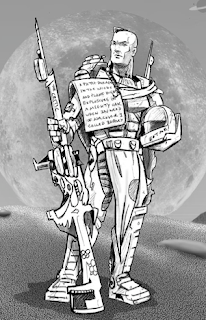 Fighting - what is it all about? From where does our fascination for it arise? These are interesting questions, and ones that martial artists and warriors have asked themselves throughout the millenia. In my view, there is an obvious corellation between large scale warfare and individual martial struggle.
In Carl von Clauswitz's view for instance, clashes of interests between two countries (states/villages/individuals) are usually resolved by the imposition of the will of one over that of the other; at first by political means, and if necessary by war. War, he claimed, is a natural phase in the relations between countries (states/villages/individuals). War is a form of dialogue. (on a topically relevant and interesting note: this is where terrorism departs form the warrior ethos - there is NO dialogue; not outcomes in sight - just indiscriminate killing)
Individual fighting arts also reflect this style of thinking, though on a smaller scale. it is essentially about dialogue; about one trying to impose his or her will on another. I see nobility in dialogue, in all forms of it - and in doing so, see nobility in the underlying warrior ethos. The warrior mindset is one that embraces the mechanisms of combat as something noble, even essential to the human condition. Most people that practice the martial arts, robably do so at some level or other - they they may not have thought deeply about it.
For those inclined toward an understanding of strategy and it's place in warfare, I highly recommend the following books:
- The Book of Five Rings - by Musashi
- The Art of War - Sun Tzu
- On War - Clauswitz
- The Prince - by Machiavelli

I am now taking the rest of my Sunday off. So best wishes to you all ...
regards,
JBW
Email Post
Labels: being present enrichment now