Up, Over and Up 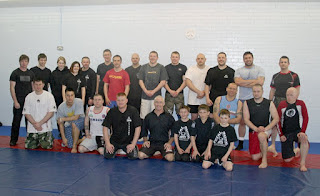 Phil Wright came down to pick me up from Coventry, bringing with him, two students - Gaz and Chris (Chris being an ex pat Aussie now living and teaching on the isle of man). We headed north for a couple of hours, up to Manchester where we hit the mat for an hour or so before the troops started piling in for the evening seminar. The night went all too quickly before finishing up about 10pm. Graham Cook (who runs a keysi MMA school in Hull) arrived to pick me up for the drive across country to the eastern side of england. it was well after midnight when we arrived in Hull - and a few hours sleep were had before we hit the mat the following day. Again, after spending a little time with Graham, the students bagan pouring in for our afternoon session. This was a no-gi, MMA based session - and a good time was had by all. Drew Hopkinson, my friend from newcastle (a few hours up to the north) had driven down to do the session and to provide transport for the next leg of my trip. As it turned out, we stayed the night in Hull, before making the early morning drive north to newcastle where I took a sunday afternoon BJJ session for Steve Muckle's group. This was all organized by Drew, who had organized lodgings for me at the Linden hall country club - hey what - very english, very cool. I just finished breakfast and am about to head back into newcastle for round two - today being an MMA class. I'll stay the night here at Linden Hall again (spoilt) - before heading to London in the morning to train Ken Pankiewicz'z group (TKD) at the Kickfit Academy.
Best go - need to pack for todays training.
regards,
JBW
Email Post