THE GUARD: My heretical view … 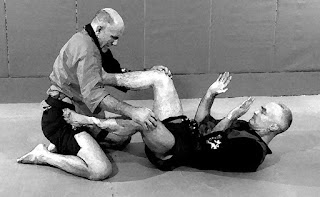 The process of re-invention requires that we continually look back at what we think we understand, but through our new and current perspective. In BJJ, this means that we should look back at the basics we learned as a white belt, and re-asses them as a blue belt – as a purple belt, we should take another good look at what we consider to be the building blocks of blue belt – and so forth. And so now, having been a highly active black belt for some ten years – I look back on the white belt basics and see them in a new light. One of the bedrock platforms that BJJ is built upon, is the concept of the Guard. The idea of the Guard gave hope to the combatant that found him or herself, not only on the ground, but on the bottom side of the fight. Prior to the ‘Guard concept’, if you were on the bottom, you were losing – and that was that. The ‘Guard’ changed the way the whole world looked at ground-fighting. Traditionally, in the art of BJJ, students are first introduced to the Guard idea – via the closed Guard techniques and strategies. Looking at it all now though, after having taught thousands of people, ranging from military, law enforcement, both amateur and professional martial artists, fighters, kids and others – I find myself taking a different view of how the first building blocks of the Guard should be laid out.
Before everyone starts jumping up and down – in either anger or disbelief at this heretical point of view – remember, it is only that, a point of view – bear with me.
The ‘Closed Guard’ concept, is certainly a powerful and worthy strategy – there are many potent and workable ‘Closed Guard’ techniques that we can use – it’s just that I don’t think it should be our ‘first port of call’. I think that the Closed Guard, should be the second or third rung on the ‘bottom defence’ ladder – not the first! The logic, as I see it, goes like this …
Lesson One: if we hardwire ‘pulling to Guard’ as our automatic response to being on the bottom position, but we have no skills as yet, we may well find ourselves in more trouble than we would like – particularly if the opponent is wailing away with punches from above (read: Ground & Pound). I think the closed Guard has evolved from a purely grappling-based point of view, as a way of preventing the ‘grappling oriented’ opponent from easily ‘passing’ and gaining a strong position on side control or the mount. For street or MMA applications, I believe it is far better to start with a Neutral Guard and maintain DISTANCE CONTROL, when first starting out.
Imagine this, you’ve had your first lesson in BJJ and you are taught to ‘pull to closed guard’ – told also that there are many powerful sweeps, armbars and chokes you can use form that position (and there are) – but that very night, as you leave the mat to go home, you are assaulted – in the real world – and finding yourself on the bottom, you ‘pull to Closed Guard’. WHOOPS! Now what? As your attacker reigns down a barrage of punches or starts clawing at your face – you begin to bemoan the fact that this fight couldn’t have been postponed for six months or so, until you had been better introduced to the big swag of closed guard techniques that had previously been hinted at.
So what’s the alternative? Open Guard: FEET IN THE OPPONENTS HIPS – Control the distance. In my view, this should be the ‘first port of call’ – from here we can later on (as we learn more) easily transition to a whole range of Guard possibilities: Hooks Guard, ½ Guard. Closed Guard, etc. if I had to choose a ‘centre of operations’ in terms of the Guard landscape – it would be the Open Guard: starting with both feet on the opponents hips, controlling his ability to strike us and maintaining distance control. From there we can always kick him off, get back to our feet, run back into the school and ask the instructor for another lesson. Alternatively, if we have had a few lesson, and learned a choke, an armlock or a sweep or two – we can take the Open Guard a step further by taking hold of our attackers collar (thereby controlling the distance in two directions) and start to make him pay for his indiscretion.
I’ll finish this up by pointing out that I find it is easier to instruct beginners in the ‘scissor sweep’, the ‘figure 4 armlock’ and the ‘cross lapel choke’ and other basics, from the Open Guard, than it is to do so from a Closed Guard. I have also found that they then find it easier to transition to other Guard (Closed, Hooks & Half Guards for example) from the Open Guard, than they do from the Closed Guard. They’re on the ground, underneath – GET THEIR FEET IN BETWEEN THEMSELVES AND THEIR ATTACKER – simply put, they GET IT!
JBW (qualified heretic)
Email Post

Really enjoy reading your thoughts on training and technique. I'm looking for a good BJJ training school in Adelaide, any you can recommend?

JBW said…
Hi Andrew,
glad you are enjoying my blog - as far as schools in Adelaide go, I recommend the ones listed on our clubs page. Go check them out. I was just tere last weekend. Will be back in October. Hope to see you there.
Best wishes,
JBW
12:56 pm

Anonymous said…
Hello John,
Interesting thoughts on the first guard, after doing your seminar at Ultimate in Heathmont I have to say I agree with you. That afternoon we were praticing the techniques you taught us that morning and having a bit of a roll, I found that for a 2 month beginner like myself keeping a distance using the legs on hips gaurd allowed me more time to think before making my move. I look forward to the Torunament in September and the Seminars also. I would like a rules sheet on the tournament, as this would be my first I would like to know how it works. Where can I find one of these?

JBW said…
Hi Andrew,
I shall have our fantastic webmaster upload the rules to our website - where you can also download the entry form and the poster.
Best wishes,
John
11:15 am

I found Your thoughts and observations very interesting. As a BJJ beginner it makes sense to me and to my game to have an open guard and use my legs for distancing. Gives me time to work my options.

Anonymous said…
Can you introduce a place to train bjj with a qualified black belt instructor in Singapore?
3:10 am