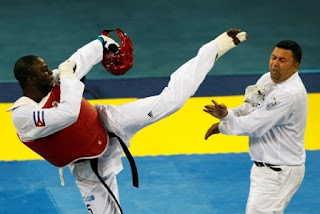 Two things spring to my mind after watching the Cuban TKD fighter shoot one into the head of an official after he was disqualified at the Beijing Olympics:
- Firstly: Outrage! This is the ver antithesis of what the spirit of martial arts (let alone the Olympics) is all about. What a coward!
- Secondly - and although this may be a controversial observation, it is stil an interesting point worthy of consideration. Now although we all understand that TKD is a sport (and a great one), it's effectiveness as a means of self defence, particularly when compared to boxing, kickboxing or MMA, is questionable. At Olympic level, with a free shot on a totally unsuspecting referee (shameful) - the referee was hardly fazed. The kick had no follow-through (thankfully) and if that had have been a street-fight, the kicker would have achieved not much more with his 'king kick' than he would have with a pathetic jab.
We are all products of our training. if we pull the kicks in training, then we will pull them when we are put to the test in moments of pressure.
In watching the footage of the terrible incident, you can see the crazy cuban also throw a body shot at another official - which also fails to produce an effect. Meakes you think ...
In any event, I am sure my observations will not be appreciated by many - as the focus should remain on the UNSPORTSMANLIKE behaviour' - but I like to make all kinds of observations, not just the popular and obvious one.
I'll finish up with in the famous catchcry of Aussie reporter Derren Hinch - SAME MATOS! SHAME, SHAME, SHAME!

Anonymous said…
I was thinking the exact same thing... Also compare a this "kick to the face" with a head kick in any UFC. Very different results.

Was pretty disgusted with the attack on the ref though. Not my definition of warrior spirit.

Anonymous said…
I actually said the same thing at work today (and that you would have got a lot more damage from one of the Soccer players) - got some very strange looks from the accounts ladies!
5:54 pm

O Rei said…
This comment has been removed by a blog administrator.
12:44 am

O Rei said…
Big Fan of your Blog by the Way. I Link to it through mine.
O Rei de Reis.blogspot, Just want to make sure thats cool.

Any way. We got into a debate about TKD after this happened. We all came to the same conclusion. Just not enough power. And if you can't do damage in a fit of rage, no way your going to survive a streetfight.

JBW said…
o rei de reis ..
you are most welcome to link through to my blog on your site. Thank you.
Best wishes to you,
JBW
8:02 am

Mike said…
yeah I got into a tad of trouble at work - someone knows someone who's on the TKD olympic team so didn't react to well to my comment: "did you see the guy lose it at the ref? Luckily it was TKD so no one was seriously injured"
5:10 pm

Anonymous said…
i had the same thought process but in reverse [must be the upbringing ;) ]

Samuel Wee said…
I thought the same thing watching that!

He wasn't just anybody. He was the 2004 Olympic champion too! Thats an Olympic Champion's kick.
1:37 pm