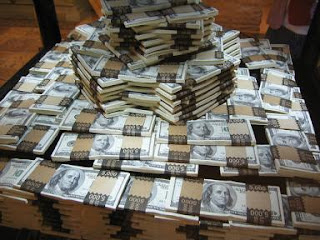 I read a book on the plane to Sydney this weekend past. it was called 'Richistan' - an it was a interesting look at the newly emergent 'nation' of millionaires and billionaires and how this impacts on the rest of the global economy. A bit dry, perhaps, but a few interesting things came out of the read; notable, this one fact: A study was done in America, where average 'working class' people were asked just how much money they thought they would need to be happy and worry-free - the answer came back: ONE MILLION DOLLARS! (Sounds like something Doctor Evil would say!) The really interesting thing though, was then the study went to those who had that million dollars and asked the same question; the answer came back: two and a half million dollars. And so then they went to those who had two to three million dollars and again posed the question; and the answer - you guessed it - six million dollars. And so it went - no matter how much money people had, they pretty much always thought they need twice as much to be worry-free and content. Even people with half a billion dollars had trouble with the fact that they were seen as failures by the billionaire club - and had to push on to the magic 'billion' mark. These people also had private jets, crews to man them, household staff, etc - all this cost so much to keep running, that they needed to keep working and earning to keep the whole thing afloat. That says a lot about the human condition.

For me, money is just a means to an end. I have never been driven by money, or the need for it. I am driven by other things - passion, wanting to see what's over the next hill, challenge, love, friendship, purpose, etc. I get money for doing things that I am good at doing - but I am not driven or motivated much by it. And I consider myself a very happy person. I love my life and do not feel 'torn' for not having my two and a half million dollars.In fact, I know quite a few millionaires that say they would love to be able to do the things I do every year. An interesting question to ask - is what stops them from doing just that? Greed can work, as a motivational tool to get you moving - but to let it control your existence is in some ways as crippling as poverty.

Human beings were not created to 'make money' - we are put here to 'experience', to 'live life in a state of excellence' - these and the other truly important things have nothing to do with the number at the bottom of our bank statement.
Live well,
JBW
Email Post

Anonymous said…
I agree. You have to remember that money does not exist, it is merely a currency of exchange that we add value to in our belief system. Money really represents time. For example, a craftsman spends time creating a product. That product is valued based upon the materials required (also prepared by someone who spent time preparing the raw material) and the time to build the product. The more skill required, the creater the value. The customer buys the product using the “money” generated with his time and skill.
So the irony is the addiction of a billionaire becoming obsessed with accumulating other people's time, but losing sight of the fact that he is not using his time to enjoy and experience life.

Spida Hunter said…
I truly do not understand how a "millionaire" would love to do some of things you do John?

JBW said…
Spida,
I am not usre of why - I have just heard that comment from millionaire friends many times over. I suspect it really is all about TIME. They simply do not seem to have the time to do the fun and cool things I do. They are too busy locked into their work-cycles. They make millionaire income - but they have millionaire expenses - and need to keep the whole work cycle going to generate more income to pay for those expenses - and so it goes. There is ultimate freedom in being poor - but you don't have many options. The trick is to have enough money to do what you want - but enough free time to do it as well.
Hope that helps.
John
11:09 am

Spida Hunter said…
Thanks John, I do understand it now that you have put it that way.

It's really NO different then what most people do EVERY WEEK except they do it on what ever income they make!

So when I look at it from that set of eyes, it totally makes sense!

I think we all have (or still do) live down that way of "unconscious" programming!