Secrets of the Shooting the Double 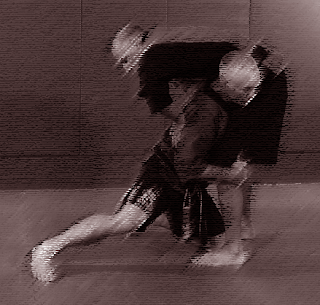 Singles and doubles are the bedrock of good ‘shooting style’ takedown strategy.
Although there are significant differences in the way we should train and execute High Doubles, High Singles, Low Doubles and Low Singles – there are also some commonalities. If we train the following components, we should enjoy an improvement on all of those takedowns:

- The LEVEL CHANGE: developing an ability to quickly and suddenly change levels is fundamental to good leg-shoots. We should always change levels before we step in for the ‘shot’.
- The PENETRATION STEP: Being able to step in strongly and with enough ‘penetration’ is paramount if we want to reduce our chances of being ‘sprawled on’. The angle of flexion in our lead knee should be ‘less’ once the step has been taken, and not greater than the angle we had on the initial level change.
- The LEAN IN: Once our shoulder connects with the opponent, we need to ‘lean’ in and ‘stick’ to him. This ‘stickiness’ will prevent us from experiencing the ‘billiard ball’ effect of knocking him away and into his defence (sprawl). On low doubles especially, the ‘lean in’ allows us to control how hard our knee impacts on the floor/ground; very important for those with ‘older’ knees or for street applications.
-
Although there are a myriad of other details that I have not gone into here, these two things alone can really make or break a single or double leg shot. A lot of students tend to put focus on the ‘finish’ of the takedown, in the same way they tend to focus on the ‘finish’ of an attack – but once again, we will never even have the opportunity of working a ‘finish’ if we don’t work through the process that precedes it. By putting time into practice of the LEVEL CHANGE and the PENETRATION STEP phases of the leg shoots, we will see marked improvements in how many shots we chalk up as ‘wins’.
Happy shooting,
JBW
Email Post

Unknown said…
It would be fantastic if you would release a DVD on Takedowns John!
Matt from Marsdens Sheffield UK
5:45 am

Matt said…
It would be fantastic if you would release a DVD on takedowns John!
Matt from Marsdens Sheffield UK
5:46 am