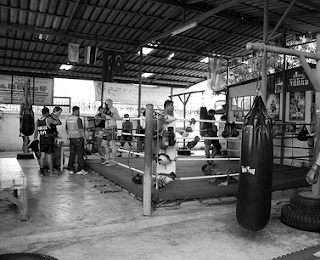 Arrived in Kuala Lumpur (Malaysia) around 6:45 am this morning. Didn't sleep a wink on the plane as it was an AIr ASIA plane with plastic immovable seats - and no space. Tough!
Upon arrival, we took a shuttle bus around to the other terminal and found our way to the Malaysian Airlines counter. There, by an amazing stroke of good fortune, we were able to secure two seats on a flight (not to Phuket as was out plan) but to U-tapao, the old Naval Airport only three hours out of Bangkok. We arrived there safely at about 10:30am - where I gathered together three other 'lost souls' and hired a driver and a mini-van to take us into Bangkok. By 2pm, we were dropped off at a hotel that I had picked at random on the internet.
As it turned out (the universe really looked after me today) the location of this hotel was right where I needed to be. After catching the underground subway down to Sukhumvit rd, we had a bite of freshly cooked Thai food before I gathered the courage to buy a few bits of clothing for my wife. Back to the hotel as the sun went down - feeling pretty good about making into bangkok, when everyone else is trying to get out.
Jumped on the net (my room has WiFi) and found the Muay Thai gym I want to train at is less than ten minutes away by subway. Craig and I headed back out into the night, flagged down a couple of motorbikes and were whisked back to the subway station. Two stops later and a two hundred yard walk, we found the gym I wanted - Jitti Gym. I have set up a session tomorrow with the owners brother - a former Thai Champ.
Back to the hotel - one more coconut juice - and up to my room to write this blog.
A good day indeed - impossible task of getting to Bangkok - DONE - impossible shopping for Melissa - DONE - Jitti gym training organized - DONE - three coconuts and one great Thai meal consumed - DONE!
More to follow ...
JBW
Email Post

Anonymous said…
Brian and I always say that when we grow up we want to be like John. I am glad you did not have to use your yellow shirt. Have fun, Muay Thai is a blast.
6:09 am

Samuel Wee said…
Glad you made it John!