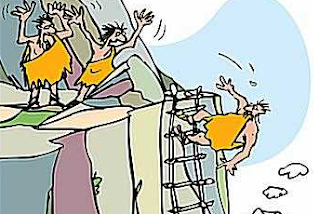 Everyone interested in the self defence applications of martial arts training should be interested in the so-called 'startle reflex' or 'flinch response'.
Quoting from Ronald Simons informative book 'BOO!' - "The startle reflex is common in mammals, birds, reptiles and amphibians. It can be thought of as an override system, automatically activated when a sudden unexpected environmental event requires immediate first-priority attention. The essence of startle is that it is the mechanism designed to ensure that the statled organism responds to a potential danger as rapidly as possible, even before the eliciting stimulus is conciously classified and evaluated.
Most startles are false-alarms. The startle reflex system is designed to be sensitive rather than selective. First respond, then assess."

Back in the 1950's, a simplistic study was done on action-reaction time. This particular study gave birth to the so-called 'Hicks Law', which underpins much of the design of defensive tactics measures utilized by law enforcment today. Many defensive tactics instructors quote Hick's Law to bolster their argument that we need to keep our responses simple when things go 'pear shaped'. Basically Hick's law states that if we are presented with a sudden problem/action, then we can respond most quickly if we respond with a single solution/reaction. IE: When we have multiple reactions/responses to choose from, our reaction time slows significantly.

Even though there is some truth to the whole Hick's Law deal - it has suffered the effects of the 'Chinese Whisper' since it's inception, some 60 years ago. Defensive Tactics instructors have been exagerating things a bit, and it has morphed into something bordering on the ridiculous. The most commonly used exageration that I hear is this: that for evrry choice we add into the equation, our reaction time is basically doubled. That is; if we have two reactions to chose from we are twice as slow, three choices, four times as slow, four choices, eight times as slow, etc.
This defies logic! Let's think about it.
If the average reaction time is 150 milli-seconds (.15 of a second) - then choosing between two responses to a given stimulus, would take us 300 milli-seconds; choosing between three responses would take 400 milli-seconds; between four responses 800 milli-seconds; between five responses, 1.2 seconds - now it gets interesting; between six responses, 2.4 seconds; between 7 responses, 4.8 seconds - now it becomes ludicrous, between 8 responses, 9.6 seconds - let's hope we never have to choose between ten responses, because according to these pundits, it would take us nearly a minute to do so - and let's not even consider having to choose between 20 responses, because we would be sitting there scratching our heads for 16 odd hours before making a decision.
Clearly, this is not how the world operates; otherwise, how would pilots fly planes? How would boxers get through even the first five seconds of a boxing match? How would ten year olds play baseball?

I do think that Hick's law can offer some value - we need to simplify things if possible; but we also need to 'raise the bar' as martial artists, or policeman, etc, by doing the one thing that can make all the difference - TRAINING!
I know several defensive tactics instructors who love Hick's Law, because it allows them to come up with a single idea that they then market as the 'panacea' to all things. These guys, I liken to snake-oil salesmen of the 1800's. One bottle cures all problems. Hey, maybe it does cure bee-stings - but don't be depending on it to cure a borken leg. The truth of the matter is that we need to train, to develop a variety of skills that we will need to deal with a wide variety of problems. As martial artists, we have a broad landscape to inhabit; and the training we do, needs to be sufficiently broad enough in nature to deal with the variety of probelms that we are likely to encounter on that landscape.

The startle reflex refers to one aspect of how we, as humans, react and interact with the world; one tiny piece of the puzzle that we need to adddress as martial artists. Study it, read about it, create a training model based on it - but don't neglect the rest of the equation - TRAIN TO DEVELOP SKILLS.
Food for thought,
warm regards,
JBW
Email Post

Anonymous said…
The DT's guys need to talk to the First Aid trainers & the Lifeguards (+ others trained to respond). Training, better still; some scenario-based training will bring about exactly that - a response. May not be a "perfect" response but it'll always help at the time.
12:35 pm