The Levels of Leverage 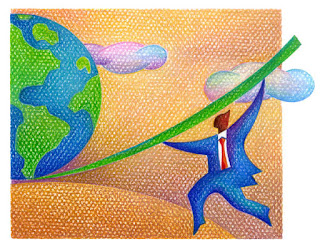 Many martial arts systems, BJJ in particular, are built on an understanding and application of the principles of leverage. What does this mean though? For years I thought I could answer that question – but the more I knew, the more aware I became that I didn’t really know. So let me take you through a sped-up version of how I came to understand what I currently know about leverage …
Firstly, I knew the word. I could use the word ‘Leverage’ in a sentence that made sense. At this point, I had absolutely no idea of what it really mean’t. I had some vague picture in my head of a guy trying to move the earth with a giant lever – who knows what he was using as a fulcrum, or where he was standing at the time???
Then, at some point, I realised that leverage had to do with ‘levers’. Slowly, ever so slowly, it dawned on me that the art of applying leverage was about achieving a lot with a little, about moving a larger object with a smaller object through some arcane use of these things called levers.
After quite a long time (in BJJ practice) I began to understand that the levers we are using (in that art) are in actual fact – the bones. I began to understand that in trying to move an elbow, I was pulling or pushing on the end of a lever known as the ‘humerus’. I also began to realise that if we wanted to move a lever, we had to apply the force to the ‘end’ of it – and not the middle of it. Basic stuff I know – but still, I admit this took me a long time to truly understand.
Slowly I began to understand how to more effectively apply force to, and move, the levers that were the opponents ‘bones’ – on the mat. My Jiu Jitsu life became easier.
Now, if we get that leverage is ultimately about getting a maximal result from a minimal effort – then it becomes easier to look at the broader aspects of our lives ‘off the mat’ and seek out opportunities to apply leverage there – in our relationships, with our finances, in fly-fishing for trout, etc. Are we getting the best result for the effort we are putting in? I hope so – because this is a natural application of one of the skills we learn on the mat – at work in the larger part of our life. Leverage …. so much more, than just a word.
JBW
Email Post