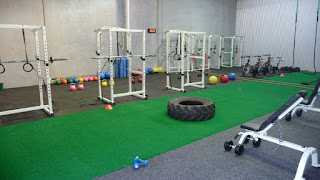 My eldest son Ronin broke another record yesterday - not one to be enviable of - this time for the longest open heart surgery in the history of Geelong hospital - just on 15 hours! After repairing a hole through the septum (middle wall) of the heart (one he received when he was stabbed seven months ago), they also replaced one of his valves, only to realise it was leaking when they were done - and so they had to redo it again. A huge day for him - but he is okay and on the road to recovery in the intensive care unit now - doing well. This should be the last of his ops - and so he has a clearer road ahead of him - and if all goes well, this summer should be one of rehabilitation and conditioning. Thanks very much to those who called or e-mailed with words of support - very appreciated

I hit another high intensity interval training session yesterday - this time upping the ante to one minute work periods with a thirty second rest between - times five exercises - followed by a one minute break and repeated another three times.
Five Exercises:
- Whipping large ropes up and down while moving back and forth in a sideways direction
- Shuttle runs with a heavy bag on the shoulder
- Cleans and squats with a cylindrical sandbag
- Flipping a traktor tyre up and down the room
- Plyo pushup on and throwing of a medicine ball

After that was done - I sprinted to the airport and caught a plane to Sydney. This was followed by a three hour drive into the Hunter valley where I took a seminar for 50 odd students in Singleton. Today , three more seminars in Sydney, with good friend George Adams, Black Belts Simon Farnsworth, Peter King and Darko Zaric, and finally Michael Scott in Cambelltown. After that, back to the airport, the one hour flight home and then the drive back to Geelong.

Tomorrow a nice day off, visits to the hospital and spend some time reading a new stack of books I have just bought from Amazon. Looking forward to a good week ahead.
BESt wishes all
JBW
Email Post

Anonymous said…
Love and prayers to you and your family.
11:02 pm

Kristian said…
That is great to hear. As a fellow dad I have been following this and sending good wibes from the other side of the globe these 7 months. I hope for a speedy recovery for Ronin and strength for the family.
1:55 am

Brad Pryer said…
You are so awesome on and off the matts John! You inspire us all! I never knew about your son John and im very glad he survived and is doing well! He has a great Dad and no doubt a great Mum and family to! Yes out here we will be sending him many heart felt healing thoughts! I also buy most of all my books from amazon too John they are great! I don't know how you find time to read them in amongst your busy schedule! With great respect! Brad
1:23 pm