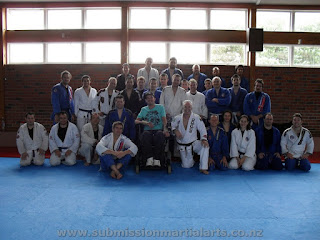 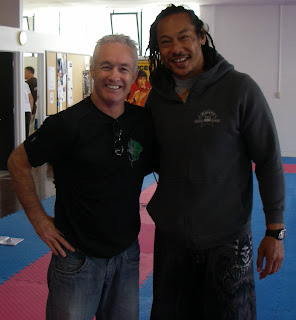 Kia Kaha - Live Strong.
Seems about right - as I am over in New Zealand at present, conducting a series of seminars throughout both north and south islands. My first stop was to visit my good friend Geoff Aitken in Christchurch. Geoff has one of the biggest and best martial arts schools in the country; it was he who pioneeered Kiwi MMA, and paved the way for others, even before MMA was known outside of Brazil. After our session, we went out for dinner and had a good chat. That left five hours for sleep and then it was an early morning flight to Auckland where I was collected at the airport by Mark Corkhill. I had a great session with MArk and Warren, made even more special by an unexpected visit by Haydn Clasby in his wheelchair. he rolled onto the mat and joined in our group photo at sessions end - a treat for everyone. His goal is to be in a rugby/friendly wheelchair by my next visit. Haydn, you are a true inspiration. The it was off to run and MMA session at the new ground Control school; a great facility and super nice group of people. karl Norton, Steven Cockell and his wife Pri also attended, so that was another treat. After our MMA session, a new crowd turned up and we ran the BJJ session for a couple more hours. At days end, everyone was fragged but smiling. A chance to eat some food, wash my gi (that's right - it's not all fun and games) and get a good nights sleep. Nest morning, a trim and athletic Karl Norton picked me up for our Maii Hyoshi session. Karl has shed quite a few kilos since my last visit - and really looks great. he's been taking more BJJ classes and has coupled that extra effort with a better diet. Awesome job Karl. Awesome! The session was a really good one, with a couple of pics being taken afterward with a well-known sports celebrity having joined in the fun - Tana Umaga. For those who don't know, Tana was a former captain of the new Zealand All Blacks and one of the best Rugby players of all time; he began his BJJ journey under the experienced eye of Geoff Grant in Wellington. As is the case with many of the truly great, he is a quietly spoken man, and happy to put his head down and just do the work. it was an extra special treat to see him bring his son Kade along for his very first BJJ class. Nice.
My other good (former pro rugby) friend, Tahi Reihana, is also a BJJ afficionado. TAhi lives in Geelong and for those who dfon't know him, he is one of the best strength and conditioning coaches one could ever hope to meet. And a man of honour and integrity to boot. Rugby, although I know next to nothing about it - is an arena where grace under pressure is a much-desired attribute; perhaps this is a commonality between BJJ and the hard=man's game ...
In the afternoon, I headed to Hamilton and ran a session for Phil Beale, who fresh from his wedding (the night before) hit the mat with his usual enthusiasm and vigor. Well done Phil - and a huge congratulations to both you and Gillian!!!
And that brings me to the present, sitting in Starbucks drinking a Chai Latte, waiting for my friend Errol to pick me up for this evenings session at IMA (Incorporated Martial Arts). I am looking forward to spending time on the mat with Steve and Reid. After that session end - I will be driven to Lake Taupo, several hours away, by my friend HArvey, where if all goes to plan, we will be met by long-time friend Shayne Cox, and the journey will continue to the east coast town of Napier. All being well, we'll arrive around 2am, and get some sleep before a big day on Tuesday.
Apologies for the travelogue-style of blog - I can't imagine too many are interested; but for now, that'll have to do. Wednesday I'll be in Wellington and teaching with my good friend Geoff Grant and then it'll be qa week off for a much-needed break. I'll try to blog again on wednesday, as Geoff has wirless access at his house.
Bye for the moment,
Kia Kaha.
JBW
Email Post

JBW said…
Tana is a real gentleman and a role model for all athletes - it was such a pleasure to have him in the class; though like everyone else, he finds the BJJ journey to be a challenging one.
JBW
7:38 pm