Risk it ... for the Biscuit 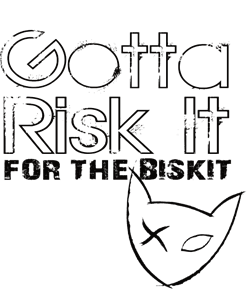 Failure in the natural world - say, 10,000 years ago …. (to a lesser extent perhaps even 100 years ago) would often result in outcomes like ‘death’ - or ‘tribal ostracism’, etc.

This is not the case today however; we can try - fail - and probably, not die! But we are still, to a large extent, controlled and dominated by that ancient hard-wiring!

As my boy Felix is fond of saying ‘You gotta risk it for the biscuit!’ - see T-shirt pic! it is an easy thing to say - but inherently difficult to do. We still don’t like to fail - and especially, we don’t like to fail in from of friends and peers.  I say - care not! Most people have their own issues to deal with - they don’t care as much about our successes or failures as we might think they do. So there you have it … Risk it - for the Biscuit!
Email Post